So is that right?

Might not be a surprise, female are often the hardest workers anyway.

Still, the right answer is no.

We have two types of male reindeer: stags and geldings.

A reindeer gelding = Castrated male (left side) and a reindeer stag = breeding male (right side).

A reindeer gelding rubs the skin off from his antlers later in winter. A reindeer stag does that before the rutting season in autumn, usually in late August.

Gelding’s neck does not get thick and strong in autumn. Stag’s neck thickens a lot: he must be ready for hard fights against other stags to win a harem of reindeer does (female reindeer) and get a change for mating. Gelding does not get mad at other males in autumn, so it is safe for him to wear a gps-collar. Stag does get mad, and it is risky to put a collar for him. A stag might get injured due to a collar during the fights and due to the fact, that his neck thickens a lot in autumn. In nowadays, there is also safety collars available for stags, luckily. The animals are very valuable and dear to us, so it is a relief to be able to track them in a reliable way.

Gelding keeps the antlers on over winter and drops them off usually in February-March. Stags drop their antlers off right after rutting, around November.

Geldings are always rather thick. Stags loses weight during the rutting season, and in early winter they are very skinny boys. They are keen to breeding and fights, not having time to eat much. Stags use more calories than they can get back by eating.

Reindeer does (female reindeer) are not pulling sleighs. That is because they are on the maternity leave.

In Finland, we have the tradition of reindeer races. In there, both geldings and stags are good competitors. The racing season is in spring winter, so also the stags have enough time to recover from the rutting season and fit to run again.In reindeer races, there is the common league and the hot league.

The gelding in the picture above is Reima. He has made a career as a hot league race reindeer and retired recently. Now he is studying to become a sleigh reindeer, and he is doing good progress with his studies. 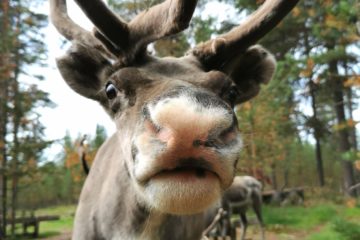